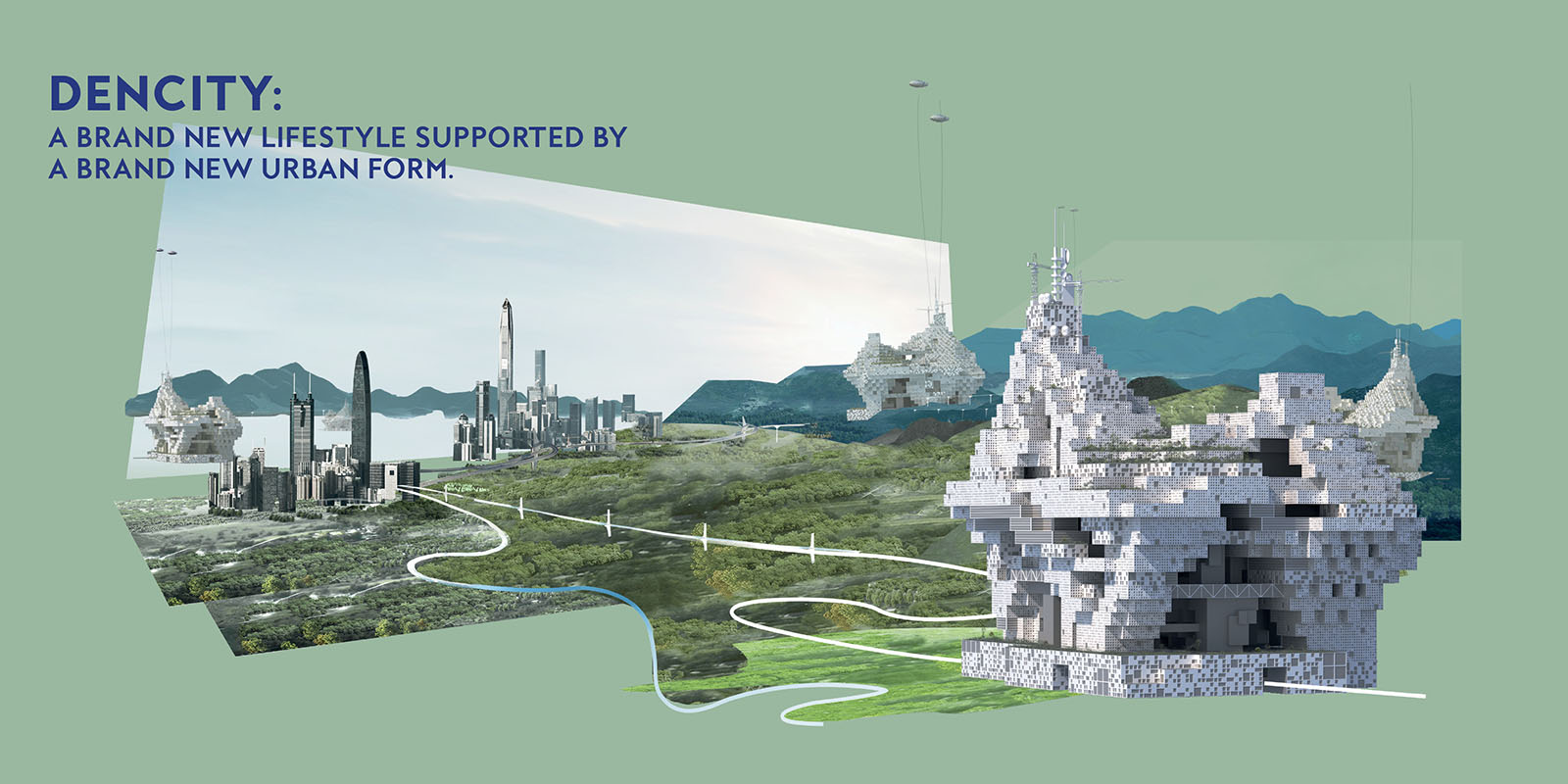 Growing from a 300,000 person border town to a megalopolis of 17 million, Shenzhen was the boomtown dreamland for the young and ambitious of China in the 1980s and ’90s. With the appealing draw of entrepreneurial spirit, this creative city expanded not only to the limit of its land resources, but also to the ceiling of affordable housing for the new immigrants. What’s the solution for such a rapid growing metropolis? It will inevitably include high density, but the city needs to take it even farther. Drawing inspiration from the idea of utopia, we can imagine a new and sustainable living/working environment.

Cities, like dreams, are made of desires and fears, even if the thread of their discourse is secret, their rules are absurd, their perspectives deceitful, and everything conceals something else. – Italo Calvino
The people of Shenzhen might be those who understand most what Calvino means.

After working in IT for some years, Programmer D starts his business and rents a co-living space together with his partners. D usually stays for days in this building. He lives with his girlfriend in the 12 m2bedroom; his partners live in other rooms. They take turns cleaning and cooking for each other. The living room is also their working space. D goes to the café in the community center for meetings or books a meeting room if there are remote conferences.

His girlfriend K works as a gym coach in another community within 10 minutes walking distance and will jog with D in the afternoon in the roof park on a lower level. One of K’s students, Mr. X, 38 years old, is an investor and owner of a few units with roof terraces. He also owns one of the three express delivery companies in town, employing a dozen delivery guys; M is one of them. M has just been in Shenzhen for a month. The company provides him a storage locker of 2 ㎡ where he stores his belongings and vouchers proving his affordability of short term apartment in the online rental system. M rents the smallest living unit. He spends most of his leisure time in the common space near his unit and cooks in public kitchens in the community. He like his new job as it takes him all around town.

Starting in the logistics center, he delivers a component that Q and her 4-person team need for their project in the hourly rented work cell in a co-working space, and glimpses the new model. Passing through a public space 5 stories high, sunlight here is softer than outside because it is brought in by light cable. The climate here is also not as sweltering as the typical Shenzhen summer. By chance, he delivers a package to S who works in the thermodynamic department, and M learns how the large-scale cooling system works; cooling medium is transported as a hot gas to 3000 meters high, where it is cooled by the 5℃ air and return back to the city to cool the hot air. As the moisture in the air condenses, it is collected for other purposes. On the condensation tower, M reads the words that are written: If you come, you’re a Shenzhener.

This imaginary scene is in DenCity, an alternative future of Shenzhen in 10-30 years. As we stand on the other side of the city’s development, looking back at the transformation of the past 30 years, it’s truly mysterious and amazing, even absurd. No one could anticipate what has happened so far, and no one is able to predict an accurate future. Utopia is a social vision which will never be realized; the true future, however, is usually more quaint and sophisticated than utopia, and often more profound.

Shenzhen was merely a collection of villages housing 300,000 people when it became a city 36 years ago, known back then only as the border town to Hong Kong. Today, it has grown into a megalopolis of 17 million, a pioneering migrant city of passion and creativity for contemporary China. An important role for this city now is to break through current policies and regulations and to surpass the constraints of reality in order to find new development strategies for our cities.

Based on this real condition, the imagined cityscape is an exploration of the city spirit of Shenzhen, a ‘reachable utopia’ in a near future. Our proposal attempts to rethink urban form from the ground up, looking for alternatives to current solutions. Inspired by past utopian thinking on cities, we believe that those once totally utopian urban forms such as mega structures are now a practical necessity for the city of Shenzhen, and can now potentially be constructed. So we present our proposal, DenCity. It responds to current issues, challenges the conventional ways of urban development, and questions existing urban forms.

We imagine a kind of mega structure; adding to everything a land plot offers within current system (i.e. land value, commercial value, residential value), such a structure can also support more valuable assets such as co-living and co-working areas for young talents. These young talents could benefit from special land policy, and be provided an affordable living environment. Altogether, this mega structure accommodates thirty to fifty thousand people across different classes, including those who now can no longer afford to rent an apartment in the city, and provides a large variety of housing options for future upgrades. The high-density environment can effectively reduce traffic; use modern techniques help to satisfy needs of lighting, ventilation, and a thermodynamic cooling system to reduce heat and humidity in a sustainable way. Perhaps, bringing people back into a ‘cave’ will cause more nature to return to us in the future.

In DenCity, a brand new urban habitation model and a brand new lifestyle is being carried out.